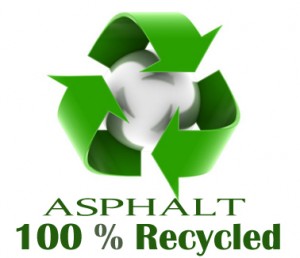 About 100 million tons of asphalt pavement is reclaimed each year, and over 95 percent of that total is reused or recycled.

When asphalt pavement is reused in a new asphalt mix, the old asphalt cement is rejuvenated so that it becomes an active part of the glue that holds the pavement together, just like the old aggregate becomes part of the aggregate content of the new mix. These singular properties make asphalt a uniquely renewable pavement. The same material can be recycled again and again; it never loses its value.

While reclaimed asphalt pavement (RAP) is the material most often used in asphalt recycling, materials from other industries are routinely recycled into asphalt pavements instead of going into landfills. Some of the most common are rubber from used tires, glass, asphalt roofing shingles, and blast furnace slag.

Asphalt plants also recycle the fine mineral particles that are generated in the process of producing asphalt pavement material. This routine recycling of co-generated material helps to conserve natural resources.

Asphalt pavements require about 20 percent less energy to produce and construct than other pavements.

Rubblization of concrete pavement with an asphalt overlay also saves energy. The rubblized pavement does not need to be hauled away; new base material does not need to be trucked in; and landfill space is saved. In addition, the need for mining, crushing, and processing of virgin materials is reduced.

Asphalt pavement rehabilitation can be accomplished during off-peak hours. On highly traveled routes, much of this work can be done at night. One or more lanes can be closed after the evening rush hour, milled for recycling, resurfaced, and then opened for traffic the following morning. Most motorists do not have to deal with the inconvenience of construction delay.

Because a new or newly rehabilitated asphalt pavement can be opened to traffic as soon as it has been compacted and cooled, there is no question of waiting for days or weeks, with traffic being detoured or squeezed into fewer lanes, for the material to cure.