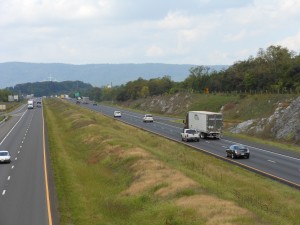 Advancements in milling, recycling and AC technology over the last few decades have created AC pavements that perform better, longer and with lower life-cycle costs than was previously possible.  Today’s AC pavements can be designed to last in perpetuity.

A Perpetual Pavement is defined as an asphalt pavement designed and built to last longer than 50 years without requiring major structural rehabilitation or reconstruction, and needing only periodic surface renewal in response to distresses confined to the top of the pavement.  The concept of Perpetual Pavements, or long-lasting AC pavements, is not new.  Full-depth and deep-strength HMA pavement structures have been constructed since the 1960s, and those that were well-designed and well-built have been very successful in providing long service lives under heavy traffic.

The basic concept is that HMA pavements over a minimum strength are not likely to exhibit structural damage even when subjected to very high traffic flows over long periods of time.  Rather, deterioration seems to initiate in the pavement surface as either top-down cracking or rutting.  If surface-initiated cracking and rutting can be detected and remedied before they impact the structural integrity of the pavement, the pavement design life could be greatly increased.

Researchers have used this idea as well as pavement materials research to develop a basic perpetual pavement structural concept.  This concept uses a thick HMA pavement over a strong foundation design with three layers, each one tailored to resist specific stresses (TRB 2001):

In order to work, the above pavement structure must be built on a solid foundation.  Nunn (1998) notes that rutting on roads built on subgrade with a CBR greater than 5 percent originates almost solely in the HMA layers, which suggests that a subgrade with a CBR greater than 5 percent (resilient modulus greater than about 7,000 psi) should be considered adequate.  As always, proper construction techniques are essential to a perpetual pavement’s performance.